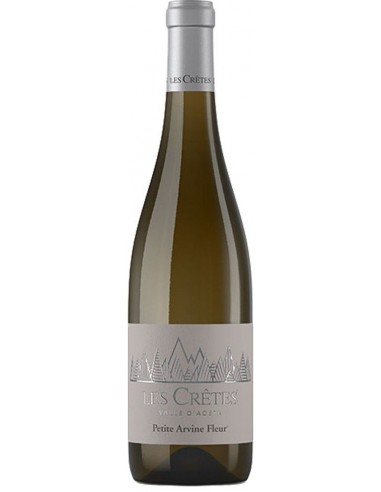 'Fleur' by Les Cretes the grapes of this "fleur" are grown in the vineyard vocational called "vin de ros", "red wine", located south on steep slopes, in the municipality of Montjovet, famous in past times for its red wines . Best expression of the Aosta Valley oenology, It enhances the traditional and indigenous varieties. Great.

'Fleur' by Les Cretes the grapes of this "fleur" are grown in the vineyard vocational called "vin de ros", "red wine", located south on steep slopes, in the municipality of Montjovet, famous in past times for its red wines . Best expression of the Aosta Valley oenology, It enhances the traditional and indigenous varieties. Great.

It is better starting by Costantino’s and Imelda’s daughters, Elena and Eleonora who had in the company the task of seeking ladybugs: yes, we are really talking about ladybugs!

The children hunted up ladybugs in the mountain meadows around Aymavilles village. They were taken, enshrined in small boxes and carefully transported to the vineyard to be released to accomplish their important work, devouring all of the harmful insects. The two children, amused by what was much more than a game, stood joyfully and watch. This is not a nineteenth-century tale, it is a simple choice made by the Charrère family who throughout its own history has always paid attention to concrete things.

The great-great grand, Bernardin Charrère, originally from France (Haute Savoie) moved to Aosta (Italy) around the mid-1700s. The family started out as farmer and miller, establishing a home site and building a water powered mill on its property in Aymavilles.

In 1810 the Charrères planted their first two hectares of grapes, focusing on making quality wines out of the indigenous vinifera varieties grown in the Aosta Valley.

Costantino’s great-grandfather Etienne, entered the production of cider as fashion and economy of time needed. The Grandpa Louis built a flour mill to grind wheat, rye and barley to meet once again the market demands of the moment.

Constantino’s father Antoine, who succeeded Etienne, carried on the flour and cider business until 1955 when the olive oil was firstly imported from the other regions of Italy.

Keen on differentiating itself, once again the family paid attention to the market. More than ever it was crucial converting the line production to afford the changes of market therefore the choice was addressed to the vineyards and wines.  They consequently began a huge work of plantation enlarging the original vineyards and  creating single crus from indigenous vinifera varieties.

Constantino, gym and ski instructor, nowadays co ownner of Les Cretes, pasionated to viticulture, decided to follow with his wife Imelda anf their two doughters the work his parents Ida and Antoine began.

After then Constantino driven by his passion and wish for making wines quit teaching and decided to build with his family what is now Les Crêtes winery enlarging the original estate.

They began to select rare indigenous vinifera varieties which were disappearing in Aosta Valley as the Prié Rouge, the Fumin, the Cornalin, the Mayolet and the Premetta, all saved now from extinction thanks to the care of the Aosta valley vignerons.

Les Cretes got as striking results, to stand out and get noticed by of one othe biggest italian wine writer Luigi Veronelli.

Since then Les Crêtes grew, constantly improving its good results, it currently manages 20 hectares of vineyards in six villages of the Valle d’Aosta. With a production of 170,000 bottles per year Les Cretes is the largest private company operating in the Aosta valley region.

Nevertheless Les Crêtes real values are still the same; the Aosta valley “terroir” has to be enhanced faithfulness respecting the local traditions without forgetting the past is the clue for any innovation.

Les Crêtes produces its wines in a very specific context, characterized by high mountains, sandy slopes and alpine temperatures.
Attention to the environment, cultivation techniques combined with specialized research and experimentation are the key aspects to our reality, which has an intrinsic and focused link with the surrounding habitat.

Each activity is carried out with the greatest dedication and care, in relation to the quality and passion that distinguishes us.
Les Crêtes follows the guidelines of the European programs of the sector with regard to plant protection treatments, choosing to make less use of pesticides.

Giving value to the territory means protect their identity

Les Crêtes philosophy continues to follow the values ​​of past generations valuing the “terroir” with loyalty and respect for tradition. The look, however, is always open to the future of innovation that allows us to express the wealth of a of a wine mountain territory : unique and unforgettable.