The Moscato di Pantelleria (synonym Zibibbo) is produced with the Moscato d'Alessandria cultivar, like all Muscat trees, it has typical Muscat aromas, mainly due to some terpenes, of which linalool is the major representative in this wine; one can have an idea of it also by chewing the grapes of Italy and paying attention to the retro-olfactory aroma that is released. Cape Zebib seems to be the place of origin, opposite Pantelleria in Africa, which refers to an Arab import. The sources, in this regard, are the Mendolia. Other sources, the Salomon, identify the origin in Alexandria of Egypt from where the name of Muscat of Alexandria.

Zibibbo is both the name of a white grape variety (also called Moscato d'Alessandria) and of the sweet wine obtained from it. The word "zibibbo" comes from the Arabic word zabīb (زبيب) which means "raisins" or "raisins". The word is improperly used to indicate a wine (such as Moscatellone) and grapes such as Salamonica and Salamanna. 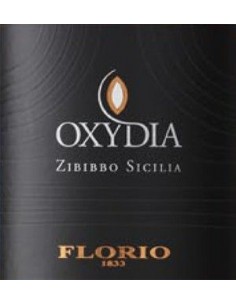 'Oxydia' by Florio comes from a selection of the best Zibibbo grapes ripened in the island to the hot African wind. Intense and aromatic, it has a complex and strong aroma, with clear hints of apricot. Ideal with pastries, fresh and dried fruit. Beautiful with sharp cheese.