The Barbera grape is widespread in Piedmont, Lombardy and in various regions of central Italy. "La" Barbera is traditionally indicated for women (the Barbera in fact). The Barbera vine is less ancient than others cultivated in Piedmont, such as the Moscati, the Grignolino and the Nebbiolo. It is a vine whose cultivation has expanded considerably over the years and today is the most widespread red grape variety in the region and together with Sangiovese the most widely distributed vine in Italy. In the past, Piedmontese Barbera was considered a “rustic” wine, but over time it has increased its fame thanks to far-sighted producers who have been able to create, through appropriate winemaking processes, both excellent wines ready to drink and wines of medium longevity and good structure that resist time and evolve with refinement. Like Nebbiolo, Barbera also recognizes the nature of the soil of origin from which the diferent imprint that can be seen in the different names that represent it.

Barbera is a typical wine of Piedmont. It is obtained from the homonymous autochthonous vine, although it is known as less ancient than others cultivated in Piedmont, such as moscato, grignolino and nebbiolo. Its expansion has been constant over the centuries and today the vine from which it is obtained is the most widespread in the region among those with red berries, mainly in the areas of Alessandria, Alba, Asti, and Oltrepò Pavese. Barbera can be marketed under different denominations of controlled origin, often with particular types, such as Barbera di Asti, d'Alba or Canavese. Typically Piedmontese is also the "lively Barbera", a young wine with a slight effervescence. Among the barbere of Alba, Asti and the Monferrato we find quite important differences, due to the variation of the regional territory in relation to the different areas. Barbera is to be drunk young in its version without aging, to be left a few years before tasting it. Above all in its higher versions we find that the tannins (which make it rich in gallotannic acid and therefore particularly sour taste) are quite pronounced and consequently if drunk shortly after being bottled makes the palate have a certain angularity, which slowly rounding up with the passage of time. Some barbera can, in the best years, reach 15 °, without showing its particularly strong alcohol content, as the structure of the wine tends to balance it making it pleasant and easy to drink.

Sort by:
Relevance Name, A to Z Name, Z to A Price, low to high Price, high to low
Filter (8 products)
Clear filters 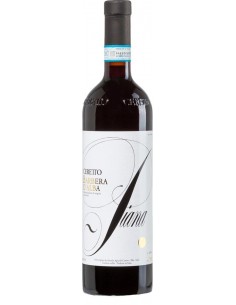 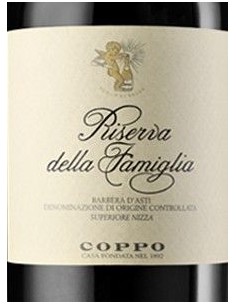 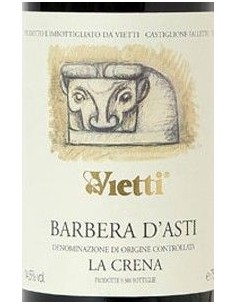 Barbera d'Asti Superiore DOCG Lequilibrio® by Montalbera born in 2008. Striving through an ever better ripening of the grapes and the best techniques in the cellar. This wine comes from older plants and is much matured in large barrels As in barrels and offers a taste of great depth and charm

The Barbera d'Asti DOCG Superiore 'Nuda' by Montalbera only 999 bottles, numbered and carefully selected, selected from the best barriques. It comes "PRESA NUDA" directly from the barrels, unfiltered, not stabilized and not diluted in steel tanks, but rather immediately bottled. To be inserted safely among the best Barbera ever.

The Barbera d’Asti Superiore Nizza 'Riserva della Famiglia' by Coppo is produced from a small cru located in Castelnuovo Calcea, in the 'Nice' sub-area. A mythological wine, produced only in exceptional years in very few bottles. Wide, voluptuous, vibrant and opulent, it is a label that really leaves you speechless. Aged long in French oak barriques. The spearhead of Coppo.

Barbera d'Alba Superiore by Casa E. di Mirafiore is the result of a careful selection of the grapes coming from the vineyards located in the municipality of Serralunga d'Alba and is vinified in the traditional way. It matures for about 1 year in large oak barrels. It is a full and strong Barbera, warm balsamic and elegant finish. Its best with the typical Piedmontese gastronomy.

The Langhe Rosso 'Long Now' by Pelissero wants to express the concept of "long present" and is the name that some important Californian scientists and intellectuals have attributed to the particular clock depicted on the label, now present at the Museum of Science and Technology in London . A red from a recently acquired plot, not far from the company headquarters, the result of a selection of Nebbiolo and Barbera. Left to mature for about 15/18 months in small oak barrels, it is then assembled before bottling and left to rest for another 10/12 months in the bottle before being sold. The characteristics are those of an important, austere wine, capable of giving emotions even after many years.

Nizza Riserva 'La Court' by Michele Chiarlo is a Barbera d'Asti that is made in one of the most important crus of the entire Monferrato. This Barbera takes on particular characteristics, which combine structure, longevity and elegance, giving rise to a dance of aromas and flavors that has upset since the first moments. The grapes, carefully selected, mature both in barrique and in large barrels, for a year. A red wine with a substantial and substantial personality, with which Michele Chiarlo continues his line of excellence.