In the large Malvasia family, the Istrian one also known as Malvasia Friulana or Malvasia del Carso, occupies a prestigious position, more qualitative than quantitative. If the origin of the vine is to be found in the Greek region of the Peloponnese, it is easy to see that the sailors of the Serenissima spread the vine in the small peninsula of the upper Adriatic: it is cultivated in the whole hilly area of Friuli Venezia Giulia, in the plains delle Grave and the Adriatic coast. Because of its morphological characteristics it has nothing to do with the other varieties of the most widespread and known family, such as Malvasia Lunga and Malvasia Bianca di Candia. Istrian Malvasia excels near the sea, where it is loaded with brackish notes which infuse the wine with a savory minerality which is its main characteristic. 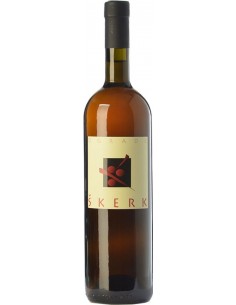 The Venezia Giulia Malvasia by Skerk is a pure malvasia, strongly aromatic but at the same time delicate. Fruity and floral white, it stands out for its surprising minerality, which derives from the karst soil in which it was born and from the maturation in the cellars dug entirely into limestone. Excellent organic wine, award-winning.

The Venezia Giulia 'Ograde' by Skerk is a blend of the indigenous white berried grapes Malvasia Istriana, Vitovska, Sauvignon and Pinot Grigio. Organic white wine with natural fermentation and long maceration in wooden vats. Aging in cask for 12 months and then bottled for a period of 5-6 months. Any clarification or filtration of wine is absolutely forbidden.