Biancolella is a white grape variety, most probably introduced in Campania from Corsica (Petite Blanche) where the first vine shoots would have been brought by the Greeks from Eubea. It has been cultivated since ancient times in Ischia, as well as in Procida, Capri, Ponza, once an island of the Kingdom of the Bourbons who planted the vine bearing it from Ischia and in the Amalfi and Sorrento coasts. Precisely because of its history and the excellent results obtained over the centuries, it is now considered a typical native vine of the island of Ischia and its volcanic soils.
From a geological point of view, Ischia is the product of numerous volcanic eruptions, which have occurred on the seabed since ancient times. The oldest volcanic activity was of an explosive type and left sediments of ashes and pumice which were followed by lava flows and other events. Subsequently, the most important explosion was that of Tufo Verde, which gave birth to Mount Epomeo and characterized much of the composition of the island's soils. The volcanic activity then continued over the millennia, until the last eruption of 1302. This volcanic nature is faithfully reflected in the wines: minerals, sapid and strongly linked to the territory. The vineyard landscape of Ischia is fascinating and wonderful: a collection of small plots on steep, remote and isolated slopes. Bold terracing, torn from the sky and the sea and flooded by the sun. A few rows, among dry stone walls, cultivated on steep slopes of white pumice and green tuffs. Around, the deep blue of the sea, which frames the geometric and irregular overhangs of the vineyards. A unique and heady palette of colors and scents. 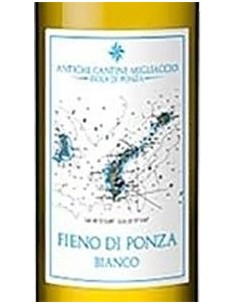 The Lazio Bianco IGT 'Fieno di Ponza' by Antiche Cantine Migliaccio comes from one of the most unreachable and uncontaminated plots of the island of Ponza. Natural approach, without chemical additives, and manual processing to obtain only 5 thousand bottles a year. Unique, warm, mineral and intense wine with a strongly Mediterranean spirit.

The Lazio Biancolella IGT by Antiche Cantine Migliaccio is a heroic wine, made with native grapes of the island of Ponza, the pure white wine. The soil, tufaceous and sandy, contributes to making this white unique, aged in steel and made in only 1500 bottles. Great freshness and minerality with citrus and ripe fruit aromas; surprising finesse and delicacy.