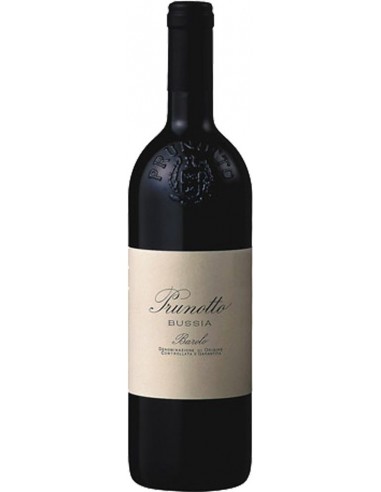 The Barolo 'Bussia' Cru line, dedicated to the great classics, by Prunotto comes from the renowned Bussia vineyard in the municipality of Monforte. Excellent Barolo, symbol of its cellar and one of the most important vineyards in the area, emblem of the denomination. Stylish, decisive, long-lasting, will be passionate over the years. A world-class red.

The Barolo 'Bussia' Cru line, dedicated to the great classics, by Prunotto comes from the renowned Bussia vineyard in the municipality of Monforte. Excellent Barolo, symbol of its cellar and one of the most important vineyards in the area, emblem of the denomination. Stylish, decisive, long-lasting, will be passionate over the years. A world-class red.

The vineyard "Bussia", one of the most famous in the Barolo area, stretches for 7.35 hectares and is located amphitheater with south-east / south-west exposure. Inside, there is a small cru of remarkable value: Bussia Vigna Colonnello. From the vineyard Bussia originates a ruby red Barolo of great character, which expresses all the peculiarities of this territory, with intense and persistent scents.

In 1904, in the council hall of the municipality of Serralunga, in the presence of Notary Giacomo Oddero and young head Alfredo Prunotto, is founded the Winery "Ai Vini delle Langhe". Among the participants in the constitution, there are characters who have left a mark in the affair of Alba and Langa municipalities and many small area producers.

The first vintage is that of 1905. These are difficult years characterized by an uncertain general economic trend, aggravated by the first world conflict. In 1922, at the expiration of the renewal of the Cellar, many members decided not to give their grapes anymore. The vintage, albeit exceptional, was not plentiful.
The winery begins to have serious economic problems and is being liquidated.

At this juncture, the young Alfredo Prunotto knows and marries Luigina, with whom he decides to take the Winery "Ai Vini delle Langhe", giving it his name. The Cantina, thanks to the passion of the two spouses, soon becomes famous and begins to export wines all over the world: first in South America and later in the United States, whose markets opened in those years. Prunuo is one of the few companies to believe in that economic outlook.

In 1956, Alfredo Prunotto decided to withdraw from the business, surrendering the company to his enotecnico friend Beppe Colla, flanked by Carlo Filiberti and later by his brother Tino Colla.

The Prunotto cellar began in 1961 to identify typical areas of particularly valuable production for the crucible vinification, such as Barolo Bussia and Barbera d'Alba Pian Romualdo.

In 1972, Ugo della Piana, an architect of Langarole origin, designs the new cellar, which will be built near Alba where it is still the home of the company.

In 1989, the Marchesi Antinori family began collaborating with the Prunotto company, first dealing with distribution and then in 1994 with the retirement of the Colla brothers, also directly in production, while retaining the excellent quality level strongly desired by Alfredo Prunotto.

One of the most important goals of the Antinori family, in agreement with the Colla, is to produce from vineyards and to have a more careful control of the product from birth.

This project took shape in 1990, when Albiera Antinori, the first-born of Marchese Piero Antinori, further delineates the personality of the winery, paying particular attention to the acquisitions of vineyards, among which: the Costamiole vineyard, Agliano, for the production of Barbera d'Asti, the vineyard in cru Bussia, one of the most renowned in the Barolo area and lands in Calliano for the study and analysis of new vines such as Albarossa and Syrah.

In 1996, the 5-acre vineyard in the Barbaresco area, named "Bric Turot", and 5 hectares in the Treiso area for the production of Muscat, are also acquired.